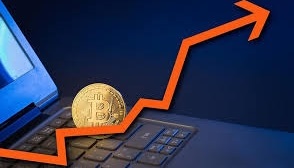 What is Bitcoin?  Here's how others describe it (source: Lifewire). Bitcoin is a new currency that was created in 2009 by an unknown person using the alias Satoshi Nakamoto. Transactions are made with no middle men – meaning, no banks! There are no transaction fees and no need to give your real name. It is a "block chain" computer program that is maintained basically on separate spreadsheets - all of which maintain the register of all Bitcoin transactions. A transaction is a transfer of value between Bitcoin wallets that gets included in the block chain. Bitcoin wallets keep a secret piece of data called a private key or seed, which is used to sign transactions, providing a mathematical proof that they have come from the owner of the wallet. My response: "WHAT???"

When my father recently asked me about Bitcoin, it signaled that the Bitcoin phenomenon had reached a milestone. It's clear Bitcoin's media attention and meteoric rise of late (at least at the time I started this blog, Friday, December 8th - but maybe not by the time you receive it!) will make many wonder if they can strike it big by "investing" in Bitcoin! Here's my take so far...

Bitcoin and other "crypto-currencies" will continue to be part of our financial landscape in my opinion. As we continue to stampede towards the "digital age," it is likely that this type of currency (maybe not Bitcoin or its current form) will gain acceptance as a clearer picture and understanding regarding how (and if) it can maintain value develops over time. What it actually is and how it works may not be necessary for many to "invest" in it and use it for currency....but more on that later.

There are many similarities to the historically infamous Tulip Craze that hit the Netherlands in 1637 when certain unique bulbs skyrocketed in demand for a short period. It was well documented how many lost significant sums of money speculating that they could sell at higher and higher prices. Although this likely speculative bubble may last longer than the Tulip Craze, it is very likely that many more will lose money than those that hit it big. This trap of "buying high and selling low" may be caused by the same phenomenon that affected tulip buyers almost 400 years ago, and remains the major reason why people have lost money in investments that fluctuate in value significantly over short periods since that time. 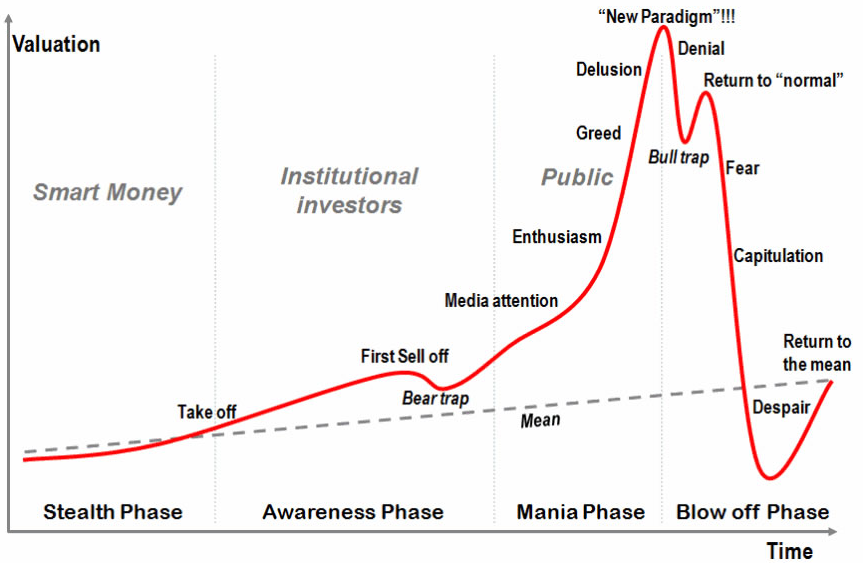 Although there are different terms used for these "phases" and data points, the emotional responses affected by volatility and unrealistic expectations are consistent - BUY HIGH, THEN SELL LOW!

In its short eight year history, Bitcoin may be one of the most volatile speculations ever. There have been five times where its price/market value has declined at least 80% in just a 24 hour period! (Source: Wall Street Journal). As of December 8th, it is up over 1,600% year to date! There's no wonder why it has attracted attention.

Although I do not profess to fully understand what Bitcoin is (which is a good enough reason alone to not recommend it for investment), and I imagine that many who are investing in it would also admit, I don't feel that will be the stumbling block to its acceptance. We don't understand fully how transferring money in our bank accounts works and remains secure, but we still take advantage of it anyway. Benefits can outweigh our concern for the "unknown." In my opinion, the determining factors regarding the long term viability of crypto-currencies (there are hundreds and they can be created at any time) are: 1) can the currency hold value and 2) can a stable and liquid market be maintained once a "real" market value can be determined?

So far Bitcoin has not satisfied either of those factors. It has been way too volatile to assume it can be relied upon to maintain any dependable value at any given time. As for establishing a true market value, we will know more about that after Monday, December 11th, when it begins to trade on established futures markets and those speculating on Bitcoin's declining value finally enter the market. It wouldn't surprise me to see Bitcoin prices fall dramatically next week, although that's just my guess.

I believe Bitcoin and other crypto-currencies are here to stay in whatever form it takes as technology advances. However, it may be a considerable period of time before it becomes a viable storage of value and is widely used as a major currency. As for investing - or more accurately speculating in Bitcoin, I wouldn't go near it - GAMBLERS ONLY!

The opinions expressed in this commentary are those of the author and may not necessarily reflect those held by Kestra Investment Services, LLC or Kestra Advisory Services, LLC. This is for general information only and is not intended to provide specific investment advice or recommendations for any individual. It is suggested that you consult your financial professional, attorney, or tax advisor with regard to your individual situation. Comments concerning the past performance are not intended to be forward looking and should not be viewed as an indication of future results.

Get Financial News & Updates Delivered to Your Inbox

Investors can always expect uncertainty. While volatile periods like the one we’re experiencing now can be intense, investors who learn to embrace uncertainty may often triumph in the long run.

Partnering with US Financial Services, LLC

We have accepted a financial partnership arrangement with Bluespring and our partnering advisory firm U.S. Financial Services, LLC. (effective Feb. 18th). Rest assured that you will not notice any structural change.

Hedging Inflation with I Bonds